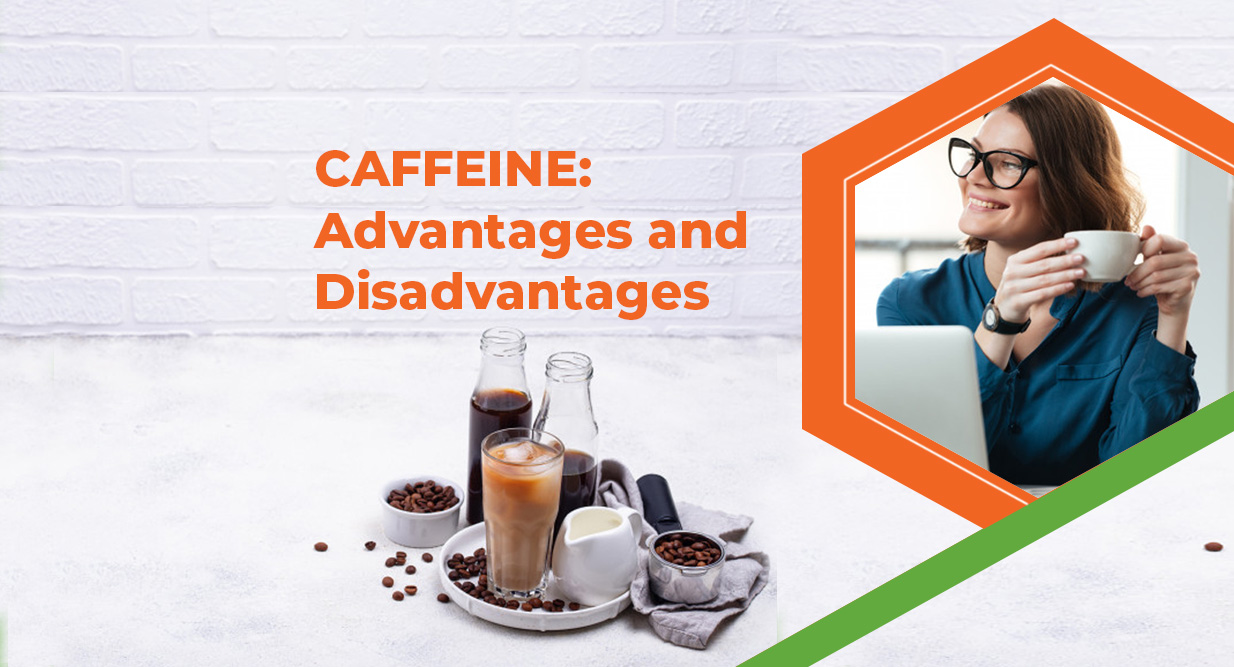 “Coffee makes the day better” is the belief of all the pro- caffeinators. With a fast-paced life, the slowly brewing pots of coffee filled with soothing aroma are a delight to kick-start the day. The mouth-watering tastes of cappuccino, latte, americano are the charms of many cafés all around. It is a well-known fact that caffeine is the most widely consumed psychoactive drug. 90% of the North American population is a regular consumer of the widely used stimulant-CAFFEINE. Whether it’s about long, tiring night shifts, staying awake for exams, or a romantic date in a café, coffee has definitely proven to be the righteous companion.

CAFFEINE-GOOD OR BAD FOR HEALTH?

This has always been a topic of debate and discussion. Well to understand more, let’s dive right in.

Caffeine is a central nervous system stimulant. When consumed, it helps you stay awake and conscious by mixing itself in the bloodstream. It functions by blocking the effects of adenosine a neurotransmitter that makes one feel tired and which relaxes the brain. Caffeine promotes a state of arousal and helps you focus. According to the USDA, coffee, tea, chocolates, soft drinks, waffles , marshmallows, energy drinks, and other snacks and drugs are sources of caffeine. 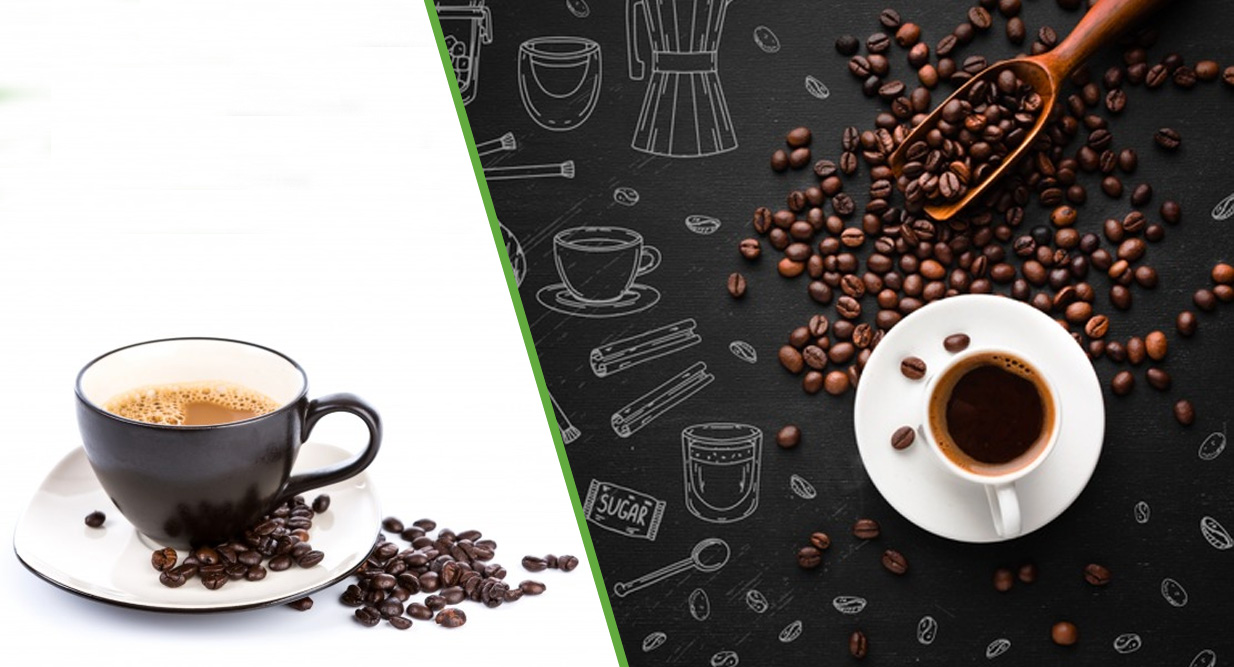 According to research, the average caffeine intake for an individual ranges from 200-400 mg.

Decaffeinated beverages are not completely caffeine-free, but they have less caffeine compared to regular caffeinated drinks. They also contain some antioxidants and a small number of nutrients like Magnesium and Vit B3.

The British Medical Journal has concluded that coffee is generally safe within usual levels of intake.

Research shows that caffeine helps to increase the metabolic rate and helps to burn calories. According to the International Journal of Obesity, it increases energy expenditure by 4-5% and oxidation of fat by 10-16%.

Theoretically, caffeine has some suppressive effect upon appetite. (reduces the desire to eat).

A study conducted on 217,883 people showed that the ones who consumed caffeine had a 26% lower risk of kidney stones. 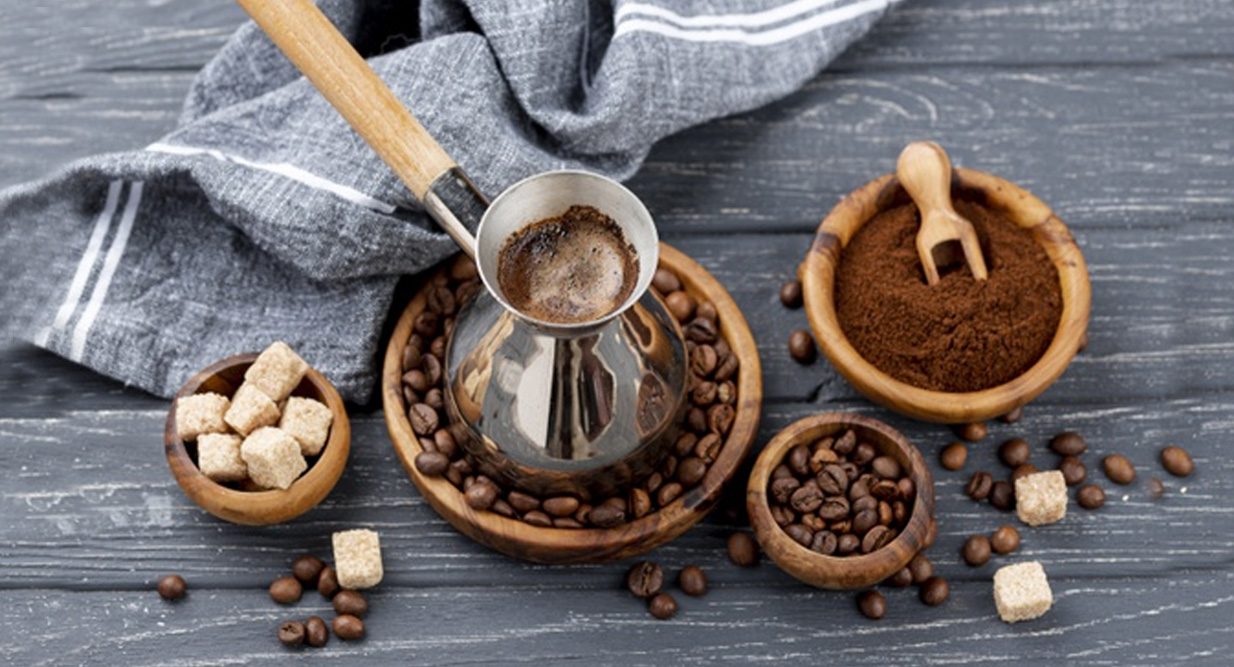 According to a study published in the ‘ Journal Of Strength and Conditioning Research’, 11 out of 17 athletes showed significant improvement in their performance after caffeine intake. It Caffeine increases oxidative stress and muscle torque. A 400 mg caffeine dose enhanced cyclists’ performance, increased their level of enjoyment and helped in burning more calories.

However, precautions must be taken regarding the quantity of caffeine consumed, since caffeine increases heart rate, and along with heavy exercise, it can lead to an abrupt increase in blood pressure.

Any college student can relate to painful experiences of having to wake up for early morning classes or staying up late to work on assignments. Most students rely on -CAFFEINE to get them through exam stress. Caffeine promotes the release of noradrenaline and dopamine and improves mood and general mental functions. It helps in counteracting fatigue and sleepiness. Many studies have shown that a moderate intake of coffee at regular intervals lowers the risk of Alzheimer’s disease by 65%. 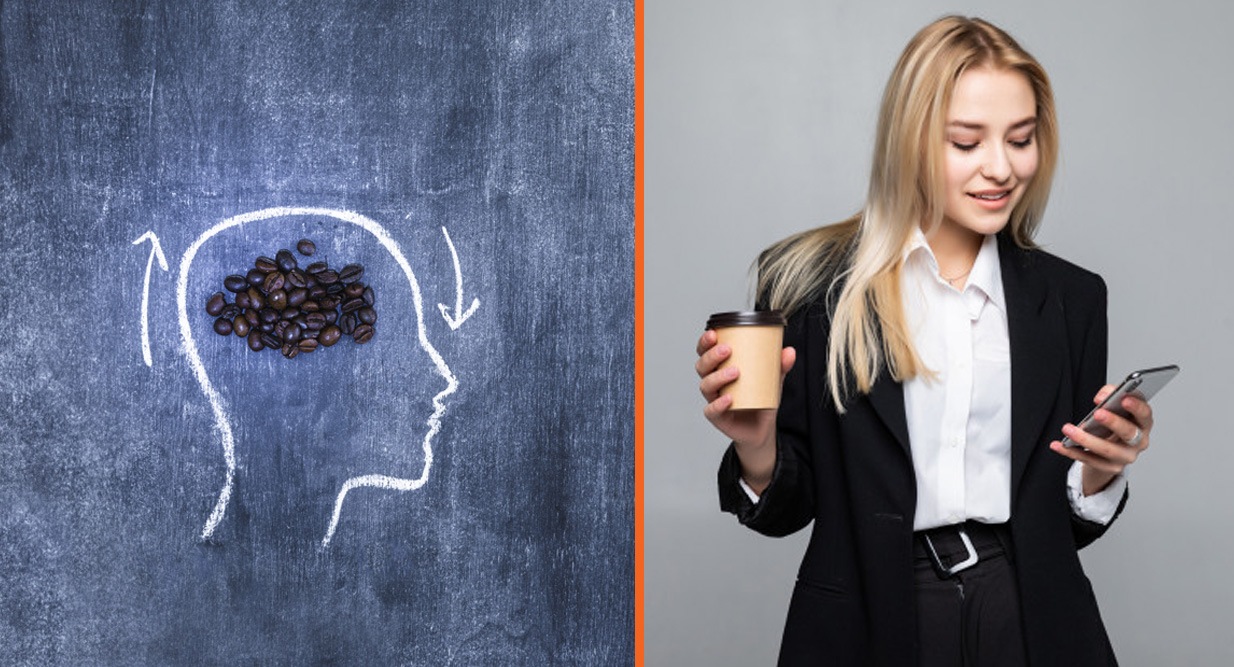 High doses of caffeine are alarming and harm health.

The quantity of caffeine consumption can be defined by a fine line of the scientific range, which can vary from individual to individual. Within limits, it can be of great benefits, but it can be harmful when the line exceeds.

An extremely high dose of 800-1000 mg can result in restlessness and agitation. It can also lead to caffeine-induced anxiety disorder.

High intake of caffeine in one go can cause rapid breathing and elevated heartbeats causing atrial fibrillation.

High doses can lead to psychological dependency, and a high amount can be habit-forming.

Over consumption of about 200 mg a day is linked to an increased chance of miscarriage and increased risk of fetal growth, especially in the third trimester.

A cup of coffee at a local shop or a college canteen that helps you stay awake might interfere with your sleep, if the caffeine quantity is not monitored because research shows that caffeine remains in the body for many hours after consumption and takes several hours to wear off. Keen attention should be paid at to the quantity and timing of caffeine consumption to have optimized sleeping hours.

So, be mindful of your approach and always choose health first. Make sure you make an honest assessment, keeping in mind the pros and cons of caffeine intake. Make sure you monitor your health, sleep, energy level, and other factors that can be affected when drinking caffeine. That’s right moderate your intake accordingly. Opting for some natural sources of caffeine like green tea and coffee is better than other caffeinated beverages like fizzy drinks.

With Health Click Away you can track your caffeine intake and daily calorie consumption to keep them in check at all times thus helping you maintain a steady weight. You can set your own weight goal weight goal and achieve it, by regularly logging in your food and water intake to keep a record of how many calories you consume. You can use the list of healthy recipes to create a sumptuous meal. Also don’t forget you can always get proper guidance from health experts to help you stay on track. 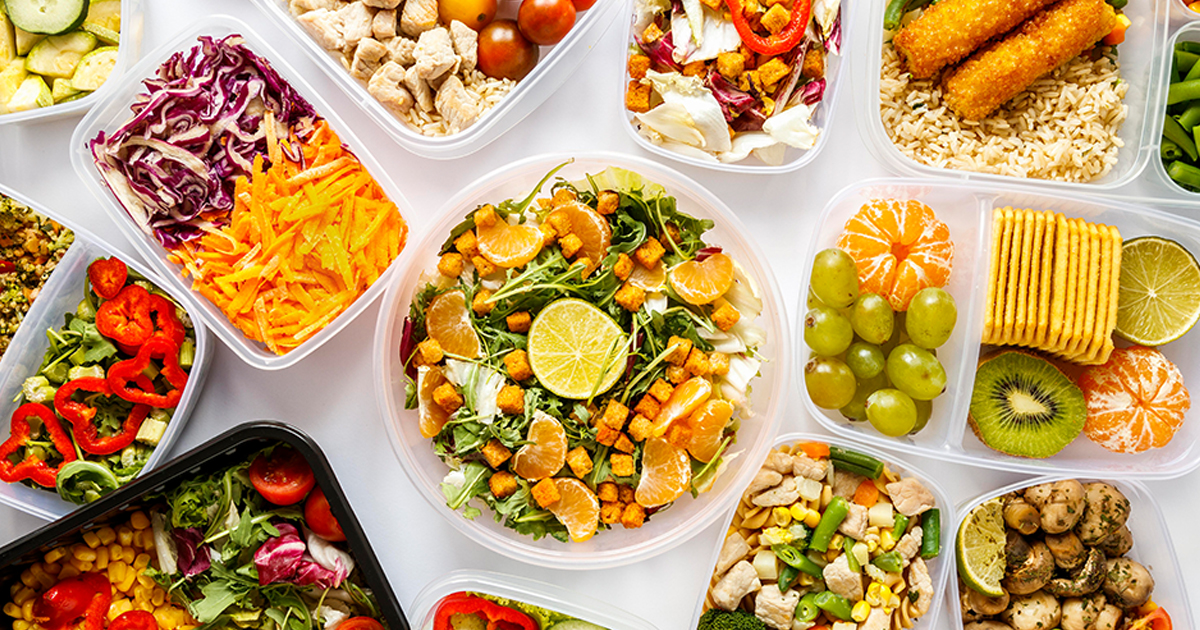 Share :-Smart Food Shopping App 🛒🛍! For most of us, just the thought of entering a food store and moving around with a shopping cart is overwhelming. It’s especially...

Myths about Diet and Dieting

Share :-Now-a-days people are getting conscious about their health, weight and lifestyle. Social media is overloaded with information on health and fitness. The most searched hash tags on social... 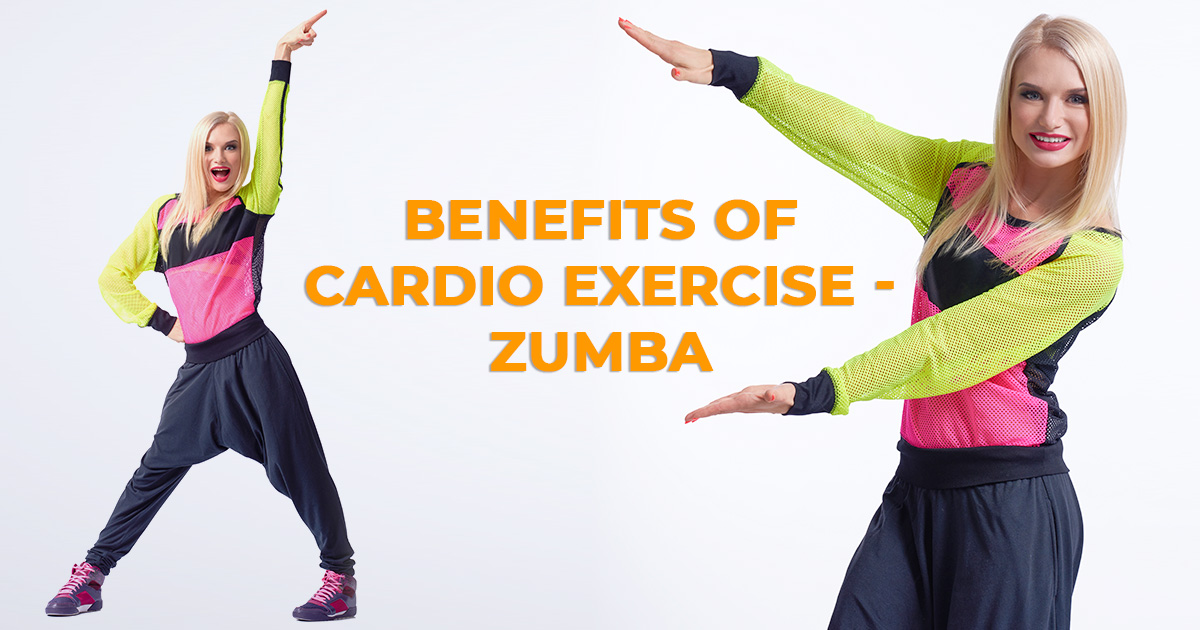 Share :- If you’re looking for a power packed, energetic and lively exercise routine that helps you shed a few pounds, without getting bored there is no better activity... 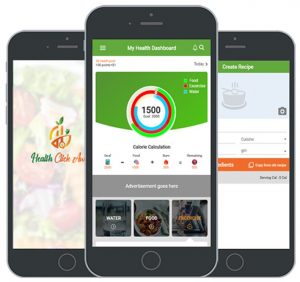 HEALTH CLICK AWAY is an Artificial Intelligence powered smart app, that can help you stay healthy and well organized by automatically building your grocery list, based on your meal patterns, reminding you when it’s time for your next meal, helping you find restaurants nearby, when you want to eat the cuisine of your choice, and all this based on the calories your body requires to consume and burn each day. “Add smile to your face, by being healthier every day, with Health Click Away”- by Ruchika Gupta (CEO, Health Click Away)

We use cookies to ensure that we give you the best experience on our website. If you continue to use this site we will assume that you are happy with it.OkPrivacy policy